Myths and Misconceptions About Drop-Forged Axes

março 25, 2011
Great article from Ross of http://woodtrekker.blogspot.com: Myths and Misconceptions About Drop-Forged Axes: "I should start by saying that I am in no way an expert on forging techniques, and everything I am about to say is based on my own research. As always, take everything I say with a grain of salt. 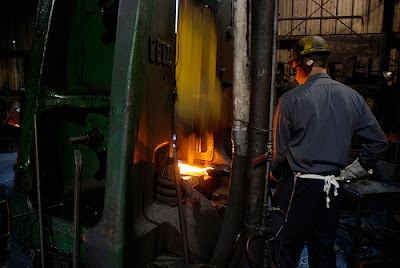 If we look at the market today, we will see two different types of axe manufacturers. There are those who produce drop-forged axes (Council Tool, etc), and those who claim that their axes are hand made (Gransfors Bruks, etc). Because of that dichotomy, and the understandable market pressures, and perhaps sentimentality, numerous misguided statements and outright lies currently circulate in the forums and common opinion with respect to the quality of each type of axe.


When we look at a forged product, there are generally four stages that can be observed.
The first is the production of the steel. Many of the famous axe manufacturers made their name because they were innovators in the field of steel production.

The second stage, and the one that distinguishes a forged steel product from a cast one, is that the steel is then taken and repeatedly folded and hammered. This process creates a lamination of the different steel layers, increasing the strength of the metal. This is a long a laborious process. As soon as automated hammers were invented, they were put to work at this stage. An automated hammer can do the work much faster and apply more force, which allows for the force to penetrate deeper into the steel, making for better bonds and stronger metal.

The third stage, and the one to which we most often refer when we speak about the distinction between hand forging and drop forging, is the process of taking the now prepared ingot of steel and forming it into a specific shape. This can be done either by hand, or with the help of an automated hammer.

The last stage is the tempering and annealing process where the steel is hardened.

One method of forging, which we have all seen at some point on television, is hand forging. This involves a person using a human powered hammer and an anvil to shape the metal. In the early stages of metalworking, a person with a hammer in his hand was also responsible for the second stage in the forging process, i.e. repeatedly folding the metal. As soon as the automated hammer was invented, the blacksmith saved his energy for the shaping process only. You can see an example of actual hand forging here.

The second method is to use a trip hammer. This was probably the earliest form of automated hammer. It utilized a cam, usually powered by a water wheel, which applied pressure on the haft/handle of the hammer, which lifted around a pivot, and then lets it fall. These hammers remained in use well into the twentieth century.

The third method is drop forging. The drop hammer differs from the automated trip hammer in that the weight is raised vertically, usually using hydraulics, before letting it fall. There are two distinguishable forms of hot drop forging.

The first is open die drop forging. In this process, both the hammer and the anvil have a specific shape, but the metal is allowed to expand freely to the sides when struck. In this process, the ingot is usually taken through successive hammers with different dies until the final product emerges. As far as I am aware, this is the method used by all the axe manufacturers who claim to “hand forge” their axes. The reality is that this is just another type of drop forging. You can see the process here.


The second type of drop forging is the closed die or impression method. Similarly, here there is a die on the hammer and the anvil, except that the die on the anvil has side enclosures. That way the metal is more quickly formed into the desired shape. This method also requires a number of hits from successive hammers with different dies. The number of hits required is usually less than in the open die method. This is the forging method used by most large scale axe manufacturers, and just about every other part of the metal forging industry.
An Issue of Quality

So, when it comes to quality, what is the advantage of an axe made using the open die forging method as opposed to the closed die method, or even a truly hand forged one? We constantly hear about how hand forged (in reality open die drop forged) axes are much better than drop forged ones. There is no shortage of questions such as “Why would you spend that type of money on a drop forged axe?” So, what is the advantage?

I have been trying to find out for some time now, and there doesn’t seem to be any. In fact, there is a clear advantage of the mechanized method as opposed to true hand forging. By automating the second step of the forging process, the quality of the metal is improved because of the higher weight of the mechanized hammer, which causes better distortion within the layers of the metal, making it stronger.

But what about open die vs. closed die forging? I can’t find anything that would indicate a difference in the quality of each product. There have been some statements about how the smith is more involved in the open die method, and that is certainly true in most cases. That however does not make a better product. The skill of the closed die drop hammer operator is just as critical. We have all seen axes produced with both methods that have been of very low quality, and ones that have been of very high quality.

So why do people think that “hand forging” is better? Why do certain older methods of production remain? The only answer I can offer is that proposed by Henry J. Kauffman in his book American Axes: “It is often difficult to understand why old methods linger while new ones are available, but this practice in axe-making has a logical explanation. The cost of a drop forge has to be reckoned against the cost of a number of triphammers. Since the axe business in recent years has been comparatively small, with reasonably small capital involved, the high cost of a drop forge was delayed as long as possible. Besides, there has been a strong conservative tradition of holding on to old techniques-if old, ergo they are good-particularly, as long as they stay competitive with the new.”

Here Kauffman is talking about the transition between trip hammers and drop hammers, but the same reasoning and financial pressures exist when we are talking about the different drop forging methods. A company like Granfors Bruks, which produces a small number of axes is unlikely to find it financially feasible to purchase a high end modern drop forge. In that way, the older methods and technology survive, and are then marketed as desirable instead of as financially necessary.

The reality is that most of the old axes for which we fight on ebay were made using a drop forge. Certainly that in no way diminishes the quality of the product, nor is the quality of a well made Gransfors Bruks axe lowered because a different type of drop forge is used. When judging axes, look at the product, and see if it works. As always, don’t buy the hype.