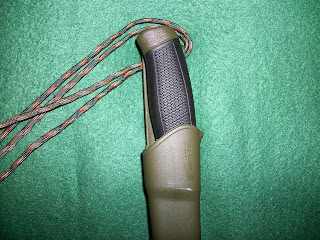 Today was like Christmas for me. I got some equipment that I had wanted to do reviews on. Marc at the EDC Depot hooked me up with a few items, He has a lot of really great items. You can go to his website to pick one of these knifes up at www.edcdepot.com. It was great opening the package and seeing all the neat stuff inside. Earlier I had promised equipment reviews so here they are. Our first review is going to be on the Mora 860MG knife. My first impression of this knife out of the box was it looked a bit cheap. After I took a closer look at it and had the chance to pull it out of the sheath, I found this knife to really start to blow me away.

I pulled the knife from the hard plastic sheath, the knife comes out with a very solid click. It holds in the sheath very well and I tipped it upside down and shook it vigorously and it still held very strong. This is one knife you will not have to worry about the knife falling out of the sheath. When I first heard that it had a hard plastic sheath I was a bit skeptical that it could be much of a sheath. I am impressed with the quality that Mora puts out. This blade is the first Scandinavian grind knife I have ever held. 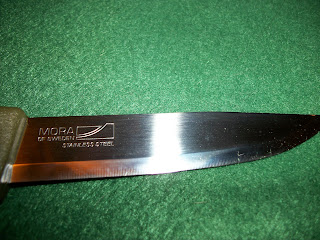 I like the grind, it makes it easy to cut into wood, and does not require you to be at a very steep angle to get a good bite in the wood. The handle is made of the same type of plastic as the sheath but it is thicker and more dense than the sheath. There is also a black no-skid cover on the handle which keeps your hand from moving all around. The black soft rubber has a slight stipple to it giving you even more grip. I have large hands and this knife does not feel at all small in my hand. It's size is just right for most hands.

After my initial first look over I really felt the need to get into some wood and see what this knife had. I was very surprised to find that right out of the box this knife is very sharp. Most knifes I get I need to get out the sharpening stone to get them just how I want them. This knife was one of the rare exceptions to that rule. It cut into wood with ease and even was easy to use on small detail carving tasks. This is rather rare in the knife world, most either do one or the other task. 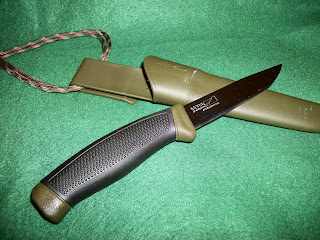 My next test for the knife was a bit more brutal than the standard wood cutting test. I have a bunch of wood cut out in the backyard and a few pieces already split. I took this knife out and split some wood for kindling using the Baton method. If you don't know what Baton is it is where you use another small log to smack the knife into the wood and start to split the wood by hammering the blade down through the log. This I think is the true test of a knife, as this is not really what most knifes are made for.

The Mora 860MG passed this test with flying colors. I have a lot of knifes, and this is my new best friend. As you can see in some of the pictures I took of this knife, I have put a Para-cord neck lanyard on it so that I can keep it right where I can get to it quickly. This is a great all-around knife. I am sure with the Scandinavian grind that skinning will be a snap with this knife. The part that really blows me away is that you can get this knife at EDC Depot for $11.99. I know I will be trying some of the other Mora knifes that EDC Depot offers. I will keep you all updated on how this knife holds up long-term. 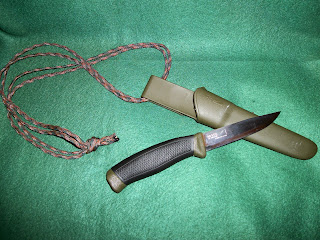 One thing that I did find out about this knife is that it does not work well with a fire steel. I tried multiple time to get a good spark of the top edge but could not get one. This is not really a big deal because most fire steels come with their own metal striker. One modification I plan on making to the sheath is to add a piece of bicycle inner tube to hold my for steel and striker. This will make it very easy to find when setting up a camp.