How to Re-Profile an Axe

dezembro 29, 2010
How to Re-Profile an Axe: "Over the last few months I have talked a lot about axes. I have often mentioned that some of them can be re-profiled and put to good use, while others are too thick. I realize that the concept can be a bit vague, so I want to try to provide some more details. 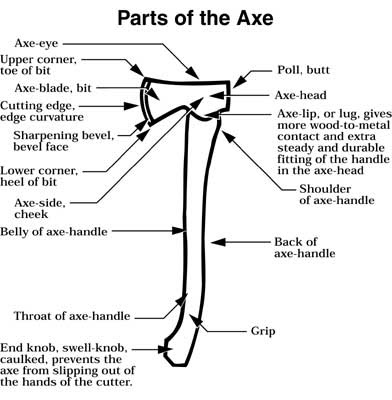 The part of the axe with which I am concerned here is what is labeled in the above picture as the Axe Blade/Cheek, and Cutting Edge Curvature/Sharpening Bevel.

A good multi purpose axe will have both a thin edge curvature, and thin cheeks/overall blade. Not all axes need to be ground that way. There are many tasks which can benefit from a more robust tool, but I think a thin blade with a narrow edge curvature makes for a good overall wood cutting blade.

Some axes, fall outside of that description. Some have thin cheeks, but the edge curvature is too wide/thick, while others are thick overall. 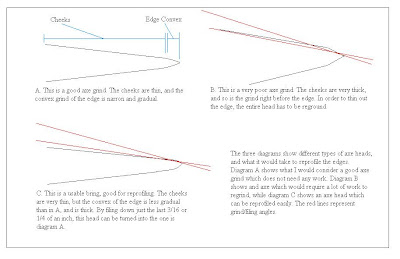 In the above picture you can see three different axe grinds. Open the picture for a larger image. The first is what I would consider good. The cheeks/overall blade is thin and the edge curvature is narrow.

The thinning out process involves filing down the thick part of the edge. 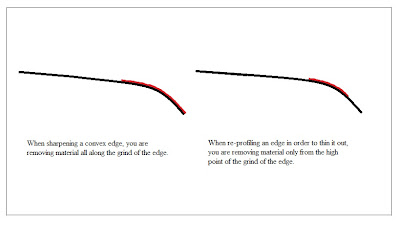 It is similar for the way you would sharpen a convex edge with a file, but instead working the whole convex curvature of the blade, you only work the parts you want the thin out. Eventually you will work it down to a level where you get the curvature you want and can transition to sharpening.

For this kind of job I would recommend using a file. I’ve been using a 200 grit 8 inch file with good results. Depending on how much metal you have to remove, you may want to get a more aggressive file. I would not recommend using a grinder because the heat form the grinding process can ruin the temper of the edge.

All modern axe heads are workable in this manner. Some older ones, from prior to the 1950s may be too hard for some files. You will need to find an extra hard file in order to work on them. Most however, should not be a problem.