Among bushcrafters a person’s skill is often judged by their ability to make a quality feather stick. Making a quality stick not only requires top-notch knife skills, it also requires the maker to know a variety of woods and their characteristics.

The feather stick is important for several reasons. The most obvious reason and use of the stick is of course to start a fire. A flame touched to several well-made sticks will start a fire even when the wood is damp. Any camper can find themselves in conditions where the only firewood available is damp, and these are often the times when you need a fir e the most. Where I live in a sub-Arctic rain forest, there is always abundant wood, and it is always wet, so wet-wood fire skills are a must.

Another reason to practice making the sticks is that it quickly improves general knife skills. Every bit of competence you earn with a knife will transfer to other projects and will also make you a safer knife user in the field.

Getting Started – The Wood

To learn which wood in your area makes the best feather stick, you will need to experiment and observe. Part of bushcraft is a continual process of experimentation with the resources around you. What you read in books may not always apply. For instance, I have read that willow is an excellent wood for feather sticks. In some places that may be true, but where I live most of the willows are too small to make feathers, and those pieces that are large enough are too hard to make anything but a poor stick. So – start with the softer woods in your area, and try them all. In my area nearly the entire forest is made up of spruce, and all varieties of northern cedar are found as driftwood on the beaches. All of those woods seem to work equally well.

Learn to read the wood grain – observe and remember. Generally, evergreen woods such as pine and spruce should be carved with the blade at a 90-degree angle to the grain. Deciduous woods such as willow and aspen curl better when cut parallel to the grain. Woods with a tight grain pattern usually carve and curl better than woods with open grain. For instance, spruce wood with 20 annual rings per inch makes a better stick than spruce with only 10 rings per inch. Standing dead wood makes better sticks because standing wood is generally drier than other wood, but other woods will work too if they aren’t too wet. Most of the feather sticks I make are from driftwood found on the beaches near my home. This wood is wet on the outside, but usually dry in the center of the log. If the wood is dry enough to float, the center is likely to be dry enough to make a feather stick. Again, experiment with your local materials.

Using saw or axe, cut the wood into pieces 16 – 20” long, then split into pieces that are roughly one inch square. Save the outside damp wood to burn when the fire is well under way.

Any sharp knife with a full Scandinavian bevel will make a good feather stick. The full Scandinavian bevel is necessary because it is the bevel that is used to control the depth of the cut. The curls on a good feather stick will be at most 1/100 of an inch thick, with most of the curls being closer to half that thickness. Holding a convex or hollow ground bevel consistently at that exact thickness as it enters the wood is impossible. With the Scandi bevel, you simply hold the bevel flat against the wood and push in. The bevel and sideways pressure serve as your depth gauge. Since you will be pushing the knife edge straight through the wood without any kind of sawing action, you will need a finely sharpened edge, one sharpened to 4,000 – 6,000 grit and well stropped. This is no place for a “toothy” edge.

The knife I am using in the accompanying photos is a Kellam Wolverine. The Wolverine won’t make a better feather stick than other similar knives, but since it has an edge hardness that is close to the hardness of a file, it will certainly make more of them without resharpening. Since I give boxes of feather sticks away as gifts, and since I have four woodstoves on my place, the ability to make lots of sticks in one setting is an advantage to me.

Start with a stick about one-inch square. It should have a straight grain, not wavy, and should be knot free. With the bevel of your knife flat against the stick, carve five faces or facets the entire length of the stick. These will be 1/4” to 3/8” in width. ALWAYS keep your free hand behind the cutting edge. In photo #1, the facets are colored with a marker for clarity. Three of the facets are visible in the photo, and two more are on the other side of the stick. 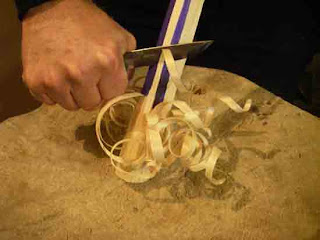 By managing the angle of your knife blade, you can control the direction the curl comes off of the stick. I have seen experienced woodsmen giggle as they discover exactly how much control they have by simply changing the angle of the blade just a few degrees. I like to make the curls on the left side of my sticks curl out a bit by cutting with the tip of my blade slightly up. The angle of the blade in photo #1 is about right. To make curls stay parallel to one of the facets, simply cut the wood with the blade a 90-degree angle to the stick as shown on photo #2. 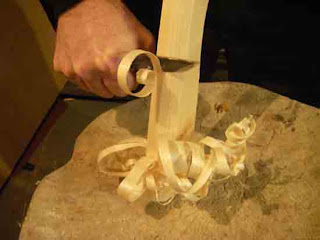 Photo #3 shows both good work and bad work. The curls coming off of the center facet are well made. They all have multiple curls – they will light easily and will make a good contribution to your fire. The two long curls way out to the side of the stick are poorly made. They will quickly burn off and fall away from the rest of the stick. They won’t do much to help you start a fire. The reason the curls stick out too far is that the tip of the knife is held too high – at too much of an angle. Your goal is to make a tight mass of curls. Adjust the angle of your knife accordingly. 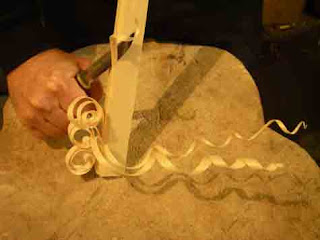 To get the wood on the right side of your stick to curl out a bit, hold the tip of your knife down. Be careful to not saw the wood, but keep the same part of your blade on the wood all the way down. This is more difficult than it looks and may take a bit of practice. 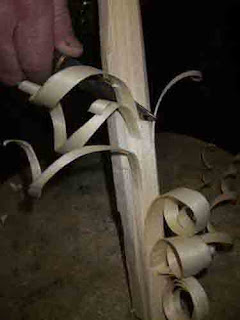 With your knife bevel pushed flat against one of the outside facets, carve a curl the length of the stick to about an inch from the end. Then go to the next facet and the next till you have done all five. Then start over again. Carve curls until you feel the stick begin to flex from its thinness. At this point you are finished – or ready for an optional next step.

Photo #5 shows an optional step. After I have finished making all the large curls, I sometimes make a series of tiny ones. The tiny curls are appropriate in two situations. First, if the wood is especially damp, the large curls may be difficult to start with a match. A single match will, however, light the small, thinner curls and if the stick is held upright, those will dry out the neighboring curls enough to get them started. Several years ago I tied up a bundle of spruce kindling and soaked it overnight in the lake near my house. The next morning I carved several feather sticks from the wet wood and finished them with the tiny curls at the base. A single match lit the small curls. Holding the stick upright with the mass of large curls on top, the entire stick was soon in flame even though the wood was fairly damp. 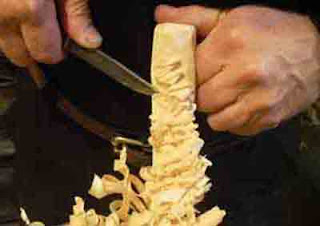 The second reason for the tiny curls is less practical, but is a lot of fun. If they are thin enough, it is possible to light the curls with a firesteel. This isn’t easy. The difficult part is to get enough sparks targeted into the center of the curls. Early last spring I was teaching a bushcraft class to a group of teens. Even though I had started feather sticks with sparks before, that day I failed miserably, and I did so while every student was watching. An hour later a 17-year-old student accomplished what I had failed to do. He lit his feather stick with a firesteel and then lit his fire with that single feather stick. And this was accomplished with a piece of cedar driftwood he found on the beach only a short time before. The result was a renewed enthusiasm in all of the students present. It was a good day.

I have read several bushcraft texts which claim that you must have a half dozen feather sticks to light a fire. If you make a featherstick the quality of the one in photo #6, you need only one. A single stick with this much curl and mass, along with some pencil-size kindling, will do the job every time. 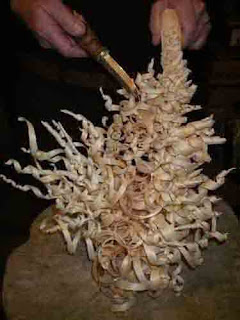 The key is observation, practice and a sharp knife. Be patient and keep trying.