The Axe Manual of Peter McLaren

setembro 08, 2011
The Axe Manual of Peter McLaren: "In the early 20th century, Peter McLaren could chop through a piece of wood with an axe faster than any other man. He broke numerous records and became very well known. He stated that he only used Plumb axes, which of course was the greatest imaginable advertisement for Plumb. They forged a special head with McLaren’s image on it, and encouraged him to write this axe manual, which they published in the 1930s. 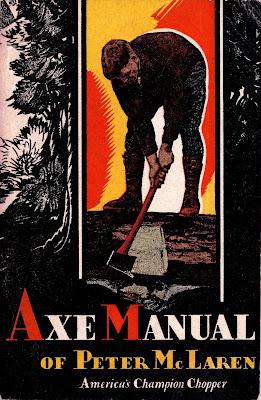 The manual is a short booklet on axe care and use. It is very well illustrated and provides great information in a very compact and direct way. As far as I know the book is in the public domain, and a copy can be found here (PDF), here and a number of other places online.