Gear List, Part 1 - by bmatt, an American Bushcrafter in Finland

Gear List Part 1, by bmatt - an American Bushcrafter in Finland

This will be the first of two lists of the gear I use for bushcraft and camping. The items listed and shown below are what I bring on outings lasting from several hours to most of the day, regardless of the season. If I plan on camping one or more nights, I will also bring a backpack, shelter etc. in addition to these items. So I consider this gear to be my basic kit, which I always have, no matter what. 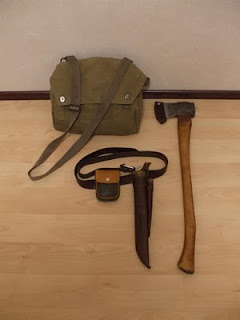 On my belt, I carry two knives (3' puukko and 6' leuku) and a belt pouch. The belt pouch contains twine, a flashlight, a compass, a firesteel, a whistle, a small fishing kit (sinkers, hooks and line), a knock-off Swiss card with a mirror, ruler, small knife, screwdriver, bottle opener, tweezers, toothpick and nail file. This might seem like a lot, but it packs up nice and small, and I can do a lot with it. In an emergency/survival situation, I could easily construct a natural shelter or use the poncho for shelter, build a fire, keep warm in the space blanket, strain and boil water to drink, have an emergency meal (oatmeal) and take care of minor wounds and such. So even though it's not intended for overnighters, I'm pretty sure I'd be able to make myself reasonably comfortable (i.e. not die, hehehe). I'm sure there are plenty of things I could leave out or add, but these are the things I have come to prefer to bring after about three years of 'deliberation'. ;)

In the second thread, I'll show what I also take on overnight trips (shelter and bedding, additional cooking/eating implements, some repair items and toiletries), as well as some seasonal items.


Thanks for the great post, bmatt. It is great to be able to look at someone else's pack!