What is the best knife for woodcarving and whittling?

fevereiro 07, 2011
http://greenwood-carving.blogspot.com talks about What is the best knife for woodcarving and whittling?: "Woodcarving is so much easier if you have the right tools for the job and thankfully in this case the right tools need not cost a fortune.

A close up shows the big primary bevel created by rough grinding and the small secondary bevel forming the edge.

The woodcarving knife should look like this with no secondary bevel.

Now the reason you don't want a secondary bevel is because we use the flat primary bevel to control the cut in carving work. It makes no difference when using a knife to cut leather or vegetable where the knife is at right angles to the work but for carving we lay the bevel flat on the wood and slide it along, a secondary bevel lifts the edge away from the wood as shown in this picture from Wille Sundqvists book, 'Swedish carving techniques'

Now the shape of the knife and actually which knife should you buy?
My personal favourites and the tools I use on all my carving courses are made by Frosts in the town of Mora in Sweden. Industrial mechanised production allows them to make good quality knives at incredibly competitive prices. They make two nice birch handled woodcarving (or 'sloyd') knives the models 106 and 120. The longer model 106 is the best general woodcarving knife I have used and costs little over £10. The shorter 120 is popular and good though not quite as good for concave cuts because it lacks the thin tip area and long slicing cuts because you need the length for those. 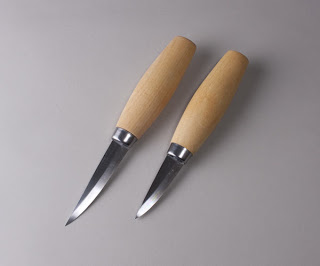 These are not the only knives suitable for carving. I am a fan of Del Stubbs knives, particularly his regular sloyd and for readers in the US I would recommend them highly.

Pocket folding knives called 'whittlers' are OK for peeling the bark off a twig or pointing a skewer for the BBQ but not for serious woodcarving.

The last thing to know about woodcarving knives is that a good tool will not make up for poor technique. When you see someone working effectively with a knife it is 80% down to technique, 20% to the tool.

This is me carving with a knife. 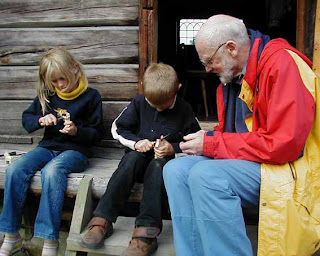